The definition. The natural logarithm function ln x is an increasing function whose domain
is the open interval (0,∞) and whose range is R, all of the real numbers. Since it’s increasing,
therefore it’s one-to-one and has an inverse, the natural exponential function, which we denote
exp x. Soon we’ll also denote it ex, but as that notation already has a meaning when x is a
rational number, we’ll have to show exp x agrees with ex for rational x.

Now, exp is inverse to ln, and that means

Let’s start by showing exp(m/n) = em/n for rational numbers m/n so we can use the
usual exponential notation. We know that

But since exp is inverse to ln, that statement is equivalent to

which is what we wanted to show.

Now we can use the usual exponential notation, but be aware that exp is still used when
the exponent is complicated. For instance, a notation like

is preferred by many
over

From this logical equivalence, every statement about ln can be converted to a statement
about ex.

Here’s a table with properties of ln and exp. 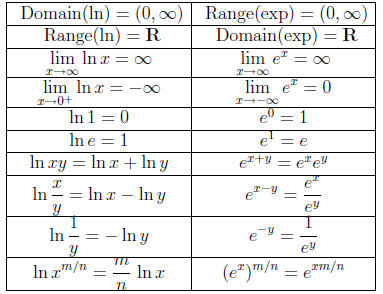 The first few lines in the table are direct translations of the properties of ln into properties
of exp. The later ones are almost direct, but not quite. For example, let’s see how the identity
ln xy = ln x+ln y implies the identity

. It would help to change the variables in one
of the identities since they don’t exactly correspond. Let’s show the identity ln xy = ln x+ln y
implies the identity

, which equals eset, and that was
what we wanted to show.

Note that the final equation in the right column of the table,

is not quite
satisfactory. We would prefer to have

for any real number y, not just for rational
y = m/n, but we haven’t yet defined what

The derivative and integral of the natural exponential function. Recall that, for
positive x,

. Let’s use that information to determine
the derivative and integral of ex. We’ll use the inverse function theorem for derivatives to to
that.

. By the inverse function theorem, that
equals

It is this property of the exponential function that gives it lots of applications in science.

Frequently, an exponential function has an exponent that is not just the variable x, but
a function of x, for instance

. To find its derivative, use the exponential rule for
derivatives along with the chain rule:

We can immediately use the exponential rule for derivatives,

, to integrate the
exponential function.